On Thursday, Mr S and I got an intriguing invitation from Mr Cooke: would we like to be part of a secret plan to create a disturbance? We are the sort of people who got thrown out of a mattress store just for asking questions, so we said yes. You’re invited to the best riot you know about, you say yes.

This plan involved crashing the Colonial Twelfth Night Party at the Major John Buttrick House in Concord. As mummers. In masks. 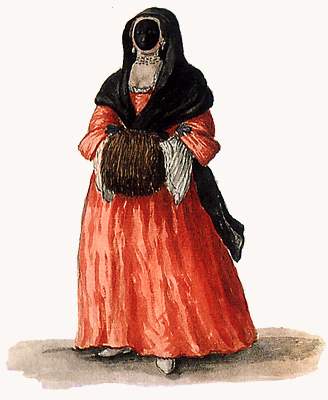 This morning, after some very cursory research and reading of the documents we were sent, I made our ‘visards.’ The form is based on the Elizabethan ‘visard’ shown here, and while that object is too early, it seems to be typical of the masks that persist, even into the 18th century.

In the Venetian carnival traditions, this round, black form is known as a moretta, held in place by a button the woman held in her teeth.

We were having none of that– I was supposed to make a ruckus, after all–so I opted for ties, which I sewed on despite the presence of a stapler. The basic form is an oval, 7 inches by 7 inches, but I would recommend cutting the forehead down if you will be wearing this with a hat or bonnet. (I had to trim Mr S’s, and should trim my own.)

Mr S borrowed my blue cloak, we both borrowed sticks for Mr Cooke, who had a very fine, knobby and thorny-looking shillelagh. In the kitchen of the Butterick House, we joined Mr C, Mr JH, and Mr GH to go over the plan one more time, and to try out our lines. Once we were gathered, we put on our masks, hoods, and visards/visages, and felt pretty creepy. Wearing a mask is very disorienting– you don’t look like yourself, but more importantly your vision is altered (especially those who couldn’t wear their glasses under their guides) and significantly limited. I wish I’d practiced a bit more, especially with the mask and bonnet combo’s bucket-on-my head sensation.

Mummer in the house.

We managed not to terrify ourselves but rather to compliment one another on our very fearsome and convincing appearances as rabble-rousing mummers. Mr JH gathered us up, and off  we went slinking out the door and to the street, where Mr Cooke and Mr FC began to sing. The two of them together made a fine and convincing racket, which I was only sorry that Mr S and I could not join (much to learn). We barged into the house and into the room where the very proper guests were gathered, and launched in.

Did I mention this was a secret? There were some confederates in the room, but the sedate civilians were caught unawares and were, according to reports, frightened. (Also very entertained, but also shocked.) A scene played out with the mummers begging for money, teasing guests, and generally causing commotion until the constable arrived and  read us the act prohibiting such behaviour. We protested each clause, but it was clear we had broken the law. Fortunately, the spirit of Christmas prevailed, and on this night before Twelfth Night, we were allowed food and drink if we would let the company alone. It was a happy conclusion for everyone.