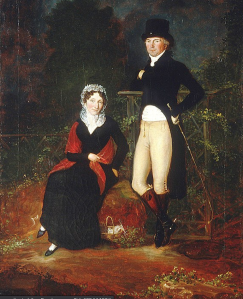 Portrait of a Couple in the Country, Josef Reinhard, 1809

We recently returned from an event months in making, as all the best ones are, with many people making new clothes and venturing into a new era: the early Federal period. Initially, I expected to portray a widow, but ended up portraying a milliner suing for damages resulting from a breach of promise of marriage. This afforded Drunk Tailor an opportunity to be caddish and impatient, and gave me the chance to be aggrieved, which I do enjoy.

Because I initially thought I was portraying a widow, I checked through my stash for appropriate fabrics, and, finding only yardage already designated for future projects (coming in March! yay!), I ordered black gauze from Renaissance Fabrics. The local fabric store failed me, and somehow I got fixated on transparency and weight: I wanted a particular drape that a heavier stuff could not provide.

I looked at fashion plates of mourning wear but came across an 1809 painting by Swiss painter Josef Reinhard and fell in love. Still, here I was on the train tracks to mourning attire when I was portraying a forsaken milliner. Fortunately, the event organizers provided documentation from local newspapers, and a plausible case could be made for being in mourning for my recently deceased father– adding another layer of poignancy to my abandonment and financial precarity.

The gown I made is my third run at an early 19th-century surplice front.  The pattern I scaled up from An Agreeable Tyrant was a reasonable place to start, though my shape has changed somewhat in the nearly three years since I first started on that. In the end, I found that the shape of the lining or base of the canezou was a better starting point. Using that back and the general shape and grainline of the front, I re-draped the front bodice pieces to my current size, adjusting the line over the bust and adding an underbust dart, based on darts seen in period Spencers.

It took about three muslins before I had a bodice that fitted well; then it was on to the sleeve. Thankfully, that only took two muslins to rework the curve of the sleeve head and the shape of the underarm, and adjust the grainline to correct the drape of the arm.

The surplice or cross-front gown appears in many images; it’s a comfortable form, and uses relatively little fabric to achieve the effect. It would also be a good form for nursing mothers, and while that was not a consideration for me, I do like the way the neckline can show off a chemisette.

I wore this over a pink wool petticoat and the white bodiced petticoat/gown that I wore under the canezou; I’d prefer a black petticoat but the one I is made for 1790s gowns and required shortening. In the future, I’ll make a black or grey silk taffeta to wear under this gown. But first I’ll need new linen petticoats since two have disappeared.

The hem edge, as always for me, was little uneven despite measuring carefully multiple times, but a ruffle solved that and added weight to the hem, helping the skirts hang and move better. The trim is based on a drawing in the Nantucket Historical Association collection and uses a quantity of black silk ribbon (which I can buy wholesale thank goodness!).

I’m generally pleased with this pattern and the finish of the gown. The lessons I’ve taken from this experience are about packing lists (and not putting the box of bonnet behind the door where it is invisible) and accessories. Once you have a pattern that really works for you– a well-fitted bodice or waistcoat, coat, and trousers– what you need to round out your look are accessories. Those are the pieces that can expand your wardrobe, dress it up or down, and generate multiple looks from just a few pieces. If that sounds like capsule wardrobes or fashion magazine advice, well, just because you saw it in Mademoiselle or Glamour doesn’t mean it isn’t useful advice.

I had a bonnet I made in 2014 (I think) that had been languishing in a box for years. I liked it– the soft tip was unusual, and the vintage ribbon and pink paper roses from the V&A went well with the dull grey– but I didn’t wear it. Sunday morning, I woke up resolved to remake the bonnet into something I will wear.

An upcoming weekend event in Dutchess County has me trawling through the fashion plates again, along with research helpfully sent along by the event organizers. A particular plate has stuck with me for some time, and finally I had the skill set necessary to tackle the thing. It takes making and looking and failing and remaking to figure out these things.

Step one was to take apart the bonnet-as-was. Satisfying work, really, not as unnerving as I feared it might be. And then? Paper patterns to figure out the sizes of the ridge and crest pieces.

I’d already committed myself to the silver-grey taffeta– slightly slubby, so second-chop, I’d already made muff cover, and had just enough left for a bonnet. The silver-grey seemed well-suited to a helmet-inspired style, and came close to the deep grey of the gros de Naples of the plate. 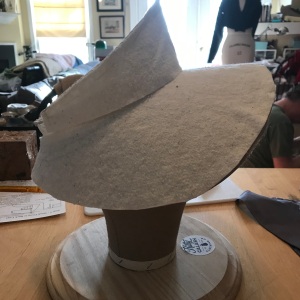 For mull, I used organic cotton quilt batting. It’s a little thick, but I pull my stitches tight and don’t want the buckram or pasteboard to show too much. The old brim piece served as a pattern for new, though I did have to use a different color for the brim lining.

The ridge was cut from homemade buckram (gum arabic on coarse linen from Burnley and Trowbridge). I used heavy cotton organdy to interline the crest. I know there is a way to get the ruffle more even, but my brain hasn’t produced it yet. Cartridge pleats and starch come to mind, along with goffering irons, as places to start. For now, this represents a Hudson River Valley milliner’s interpretation of the latest fashions. 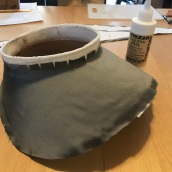 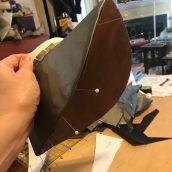 The crown is taken from the 1770s bonnet I made, to take advantage of the way that crown slopes from a brim shaped like this one. If I were to make another one of these, I might switch up the order of assembly, and I might make the ridge piece of interfaced taffeta instead of taffeta-covered wired buckram. 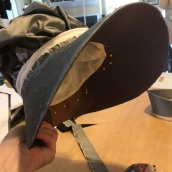 The finished bonnet reused the same ties as the original bonnet, with a similar Petersham or grosgrain ribbon band. With my 2014 pelisse and a new muff, the only new accessory I’d like to make (or can remember wanting to make) is another, slightly larger, reticule to complete the ensemble. 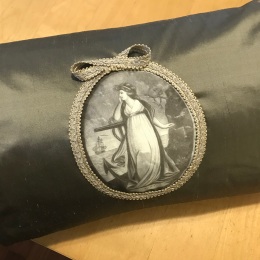