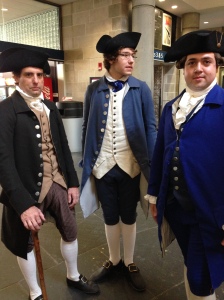 Three gentlemen at the Providence Station

L’Hermione, remember her? That French ship? We were asked back in January if we wanted to be part of a group of Citizens of Boston in 1780 who came out to greet L’Hermione when she arrived in port. Yesterday (July 11) was the day she finally came to town, and most of the Rhode Island contingent of our Massachusetts group went up on the MBTA to see her. The train was totally the way to go, though Mr Hiwell did consume three Diet Cokes before we even got to the ship. Turns out the Henry Cooke frock coat pattern pockets can each hold three cans– a full six pack per coat, should you care for such a thing. 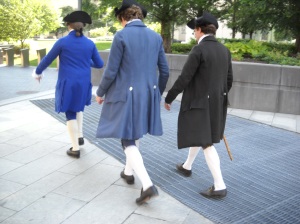 We got to Rowe’s Wharf in time for the national anthem– or, as we like to call it, The Anacreontic Song. There was much speechifying, and though we were not talking too much, water was required. Those pockets came in handy again, as did my own capacious pockets. Good thing, too: the line was long and the sun was hot. One woman offered to let us go ahead of her in line, but that seemed wrong: if you have to wait in line, you have to wait, and the rule we have absorbed is that the public comes before reenactors. But, since we’d been asked to come, we decided to check the situation, and went to inquire. The “bouncer” at the head of the line told us to come back later, so we decided it was time for some lunch. 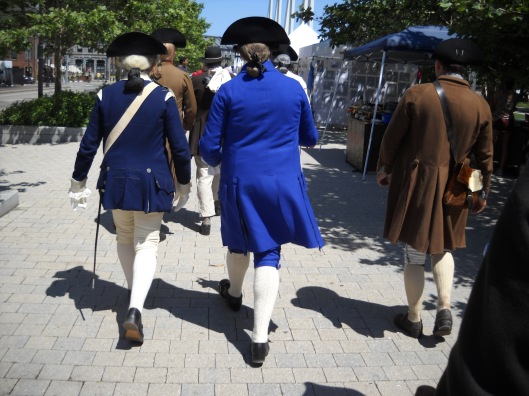 Lead, follow, get out of the way, or take another photo of backs.

By lunch, things were a little surreal as we sat at a table with people I never imagined sitting down with. No worries: it was all good, just a little weird that you have to leave Rhode Island to meet Rhode Islanders. The Young Mr inhaled his lunch, and probably made a lasting, if Hooverish, impression on our new acquaintances. The fact that the entire new contingent of the 10th Massachusetts sat on one side of the table, and that 80% of us were from RI, also made an impression. We are why you can’t have nice things.

Refreshed, we journeyed back to the ship, meeting more friends along the way. To be fair, Mr S and I had agreed beforehand that going up to Boston was as much about seeing our very dear and far-away friends as it was about the ship, and we were delighted to see every one of them. But at last, we thought, we can get on board. 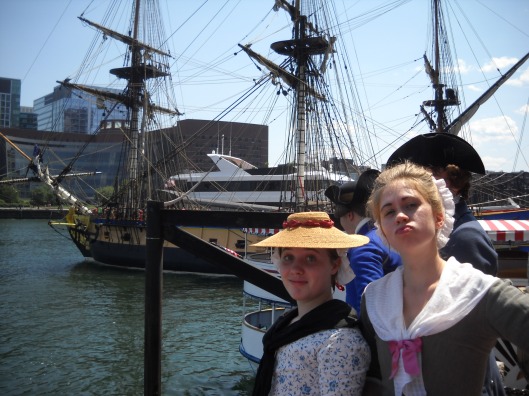 No soap, as they say. The line was closing at 1:00 and we were too late to make it into the last crowd that would get on– it was the longest line I’d ever seen– and, even worse, many members of the public waited in the hot sun and failed to board. For us, five and a half months of anticipation were dashed in a moment.

But wait! Well found again, Mr and Mrs B and Baby B. Mr S was delighted to meet Georgiana (he has a thing for babies, and an uncanny ability to guess their ages, and to tease and delight them), whom he had very much wanted to see. L’Hermione was not the only tall ship in the sea: we considered the dry-docked USS Constitution, but chose the Sagres instead, as she is only in port for a few days. Off we went on another trek, waylaid often for photos. The Young Mr in particular kept getting stopped. 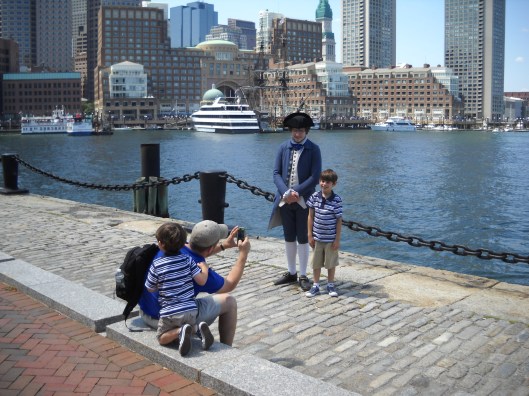 At least there was some shade here, and a bench. We took it in turns to go on the Sagres. Mr and Mrs B and I watched from the shore, and could see this happening. I don’t know how they trapped Mr S in this, but they did. 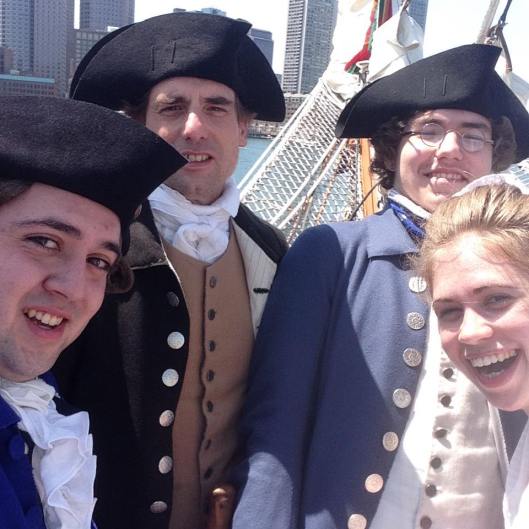 After an excursion to the ICA (which we are, as temporal performance art) for water, bathrooms, and some AC, the second shift got to visit the boat. We must have been cursed, because there was another line! At least this one moved, and however slowly and carefully in leather-soled shoes, we managed to go aboard. 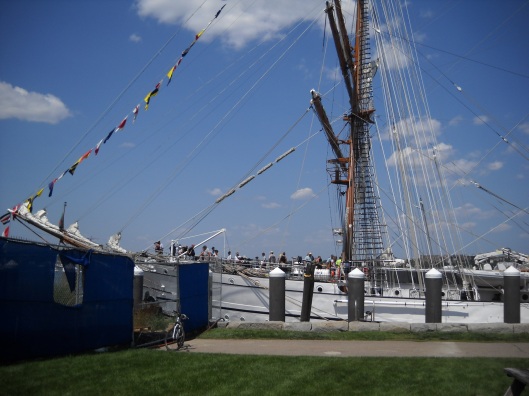 Mr B was right: oversized yacht. Still very happy to have gone on a ship and to have seen many interesting things, including a very specific kind of display. 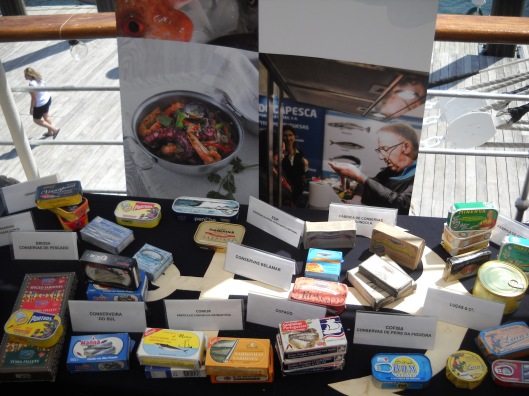 Portugal. The Best Fish in the World.

Mmmm, fish. All the packages were, in fact, empty. At this point we decided it was time for ice cream, and headed back. The Rhode Island Party ended up back at South Station for frozen yogurt and a bit of a rest. I don’t normally wear heels– ever– so a day in 18th century women’s shoes was a pedal workout. (We considered renting bikes, because if you have to be anachronistic, you might as well go all the way.)

Mr Hiwell and I considered the day: it wasn’t bad. We didn’t even get close to achieving what we thought was our goal. But we made our own fun with wonderful friends, had an adventure, and went at least three places we did not expect to go and had not been  to before. All in all, success, even in failure to board. 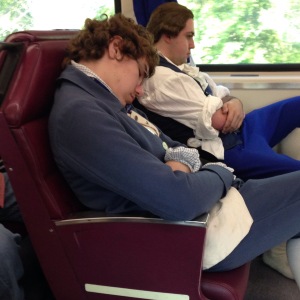 If they sleep on the way home, it wasn’t a bad day.