or, a boiled Flour Pudding in two tries.

Alone in my Ossining ca. 1962 kitchen, I decided to tackle Amelia Simmons. The first task seemed to be to establish measurements, and then proportions, so I took stock of the tools and containers I would have in a typical camp. Spoon, mug, half-pint: these are plausible items, though we have tin cups that hold exactly 8 ounces, so the measure is unnecessary. The spoon was cast from a 1780 mold, so it seemed like a reasonable place to start for “how much is a spoon?” It will hold exactly one tablespoon if you scrape it flat across or are measuring liquid. Handy to know.

Next, I checked the recipe again.

A boiled Flour Pudding.
One quart milk, 9 eggs, 7 spoons flour, a little salt, put into a strong cloth and boiled three quarters of an hour.

This is not a popular receipt, so you won’t find it on History is Served, nor will you find this version on other popular sites; you can find a boiled pudding with suet, but that’s not what I’m after: I’m after a receipt that starts with a portion of the ration of flour soldiers received, and adds only eggs, milk, and available seasonings. 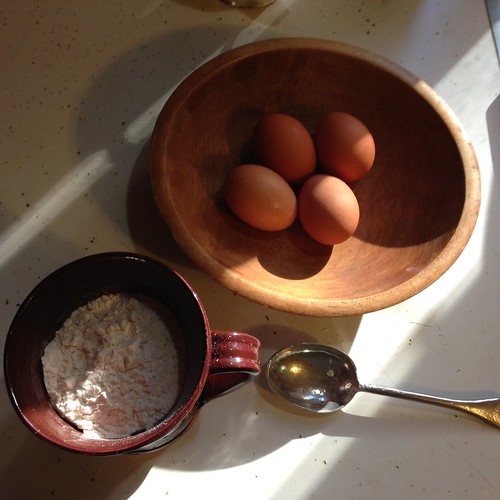 I thought I’d try a half receipt first. There are no directions as we think of them– American Cookery sometimes has that “put your lips together and blow” feeling–but this is not too complex. The eggs and milk must be beaten together, and then combined with the flour. For this first attempt, I got it a bit backwards, adding the spices to the eggs, which I beat in the large wooden bowl.

That left me scooping the egg-and-milk with the measure into the flour, which I had in a smaller wooden bowl, remembering too late the method for scones. 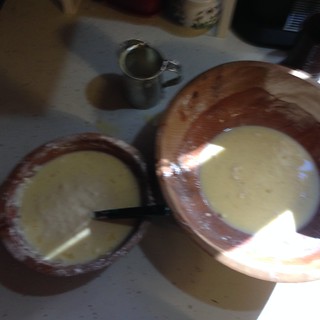 And then it was really too late: I added just too much egg-and-milk, and it became more like batter than dough. This was not correct, and I knew it, but I didn’t dump it and I didn’t add more flour. Now it’s clear that 7:00 AM is not my best time for baking experiments (it was also quite early the day I made gingerbread without any eggs). 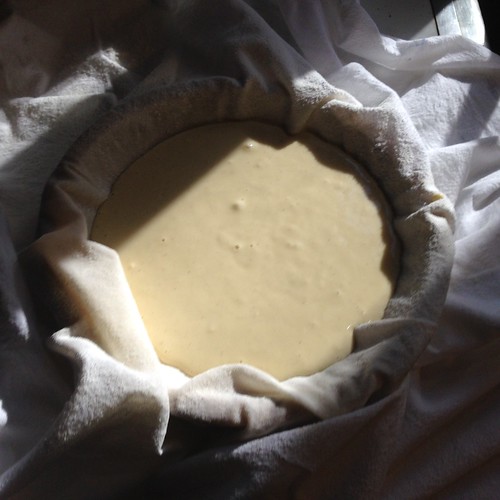 Well, it took a decent photo.

I buttered and floured a cloth anyway, and poured the mixture into it. After tying the gathered neck of the cloth with string, I boiled the whole business for 45 minutes.

I did not take a photo of the mess I found when I unwrapped the bag. It wasn’t pretty, and it was clear that while some portions of the pudding were ‘done,’ they constituted about 5% of the whole, which otherwise resembled steaming cottage cheese. Really, truly, awful.

But from time to time I am undeterred by my failures, and instead of consigning the mess to the trash and sticking with store-bought bread*, I rinsed the cloth and regrouped.

This time, I went smaller: 1 cup of flour (about five spoons), two eggs, and a scant two spoons of milk. I also managed to put the flour, salt, and allspice in the regular sized wooden bowl, crack the eggs into the mug and beat them there with the milk. When I mixed the egg-and-milk into the flour, the mixture was far too stiff, so I added more milk, but kept the mixture stiff. 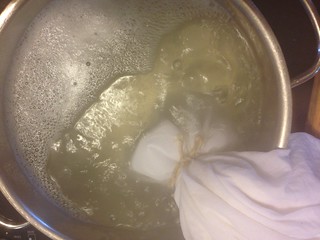 Patience is required for pudding 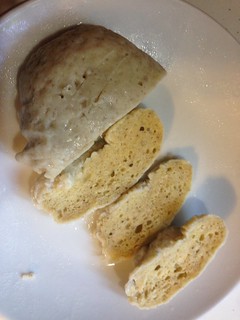 So, where does this leave me? Knowing that I’m the only documented fan of this in the regiment, I’ll stick with the smaller receipt: five spoons flour; two eggs, beaten; and three or four spoons of milk.

My plan is to boil this in whatever stew or stew-like device we have for supper on Saturday, and then eat it sliced with the stew. The plain flour-egg-milk mixture will pick up some of the flavors of the stew (think dumplings), but these could also have been served with a sauce, if made at home.

I’m also going to go back to the Experienced English Housekeeper, and see what she has to say.

* Years in ceramics classes taught me to knead all the air out of plastic material, so my bread tends to be better for building than eating. Even the dog wouldn’t eat the biscuits I made while in grad school…

5 thoughts on “Measure for Measure”