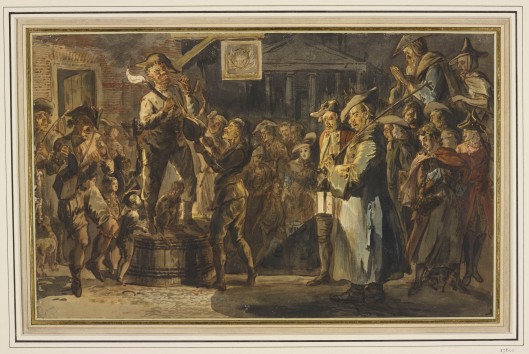 Sometimes I think I’ll forgo the dressing up and going out in public, and just do the research; the world that exists in my mind is pretty satisfactory, and within it, Boston doesn’t have the GPS-killing skyscrapers of the financial district or the motor-powered vehicles that seem bent on killing pedestrians. Instead, it has horse-drawn vehicles, equally ready to run you down.

But: in thinking about the people on the margins, the people in the backgrounds of images, the people casually mentioned– “so hard to find a cook when you need one”–in letters, I’ve been looking at even more images. Here, a mountebank, illuminated by a torch, performs on a washtub outside a tavern (Good eating every Day) for a crowd of men, women, and children. Much texture here, and many people one could aspire to be.*

Let’s get the watchman out of the way.

Is that a snarl or he is just happy to see the mountebank he can bash over the head with his prodigious stick? He’s carrying the obligatory lantern, here apparently made of tin with horn, glass, or mica windows. It looks like he’s slung it over the stick, where it is caught by by the knob to keep it from sliding.

It’s a Great Coat, really: the button-embellished flap (pocket slit?), the deep sleeve cuffs, the taped buttonholes all serve to make this coat impressive and intimidating.

On his head, a rakishly angled black wool hat worn over…a cap? Help me out here, gents. It looks like a linen cap that covers the very crest of his ear. Is that possible? Or he is tonsured? If so, you’d think he’d want a cap for the cold… 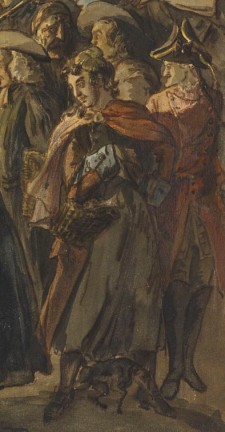 Next up: the girl with a basket. She raises a lot of questions for me when I zoom in close. Yes, Virginia, she really is wearing a cast-off regimental under a short red cloak. I’ve never understood how women came to possess these coats, but look closely and you’ll see the blue cuffs and plackets on the sleeves, the pocket flap sticking up just below her basket, and the long skirt of the red coat. (That’s a dog, not a killer shrew, between her feet.)

Her hair is a mess, too; we can speculate on reasons for that, but let’s go with a long, busy  day as a servant, and not freelance corner-based activities.

What’s in the basket? A bottle? A decanter? A funnel? Hard to tell. Is she someone’s serving girl, sent out to the liquor dealer? If she is, why that coat? Is the man in red next to her grasping her elbow? Possibly…(and doesn’t he have a nice red double-breasted coat?)…and if that’s a uniform he’s wearing, is that her connection to the coat she is wearing? So many questions.

In the center background, there’s a young woman escorting a male child; she may be an older sister, but I think it’s also likely she’s a nursemaid. In the background at the left, two ladies are seen from the back, clearly wearing neat caps and jaunty hats. They’re moving away from the mountebank and the crowd, probably on their way home, respectability leaving the dangerous streets.

It’s as much a mix of people as you might find outside the Pret a Manger on State Street today. Somewhere in that crowd, there is someone to be.

*In a nod to riots recent, let us note there are 5 or 6 women shown here, 14 men, 5 children, 2 dogs and 1 monkey. That’s a 40:60 ratio of women to men. Children are, in general, grossly underrepresented in living history. Let’s talk about that someday.