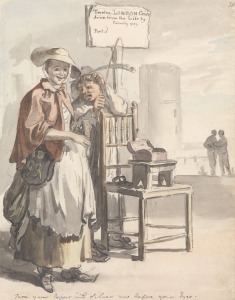 Not everyone who’s standing on the corner is up to no good. Some have legitimate business.

In the London of the past, just as in, say, the Manhattan of today, street vendors hawked a variety of goods. Having gone through multiple versions of Cries of London, I’ve come up with a basic list of the items sold on the street. 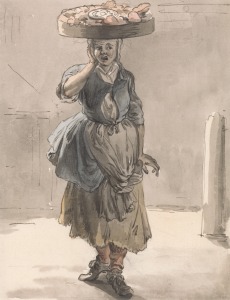 There’s seasonality to this, of course. Strawberries and cucumbers are not being hawked on the streets of London, Boston, Newport or New York in February. I’ll tell you: being a Cat’s-meat-[wo]Man is practically a childhood dream, since I knew I could never really learn to speak to the animals, and as it happens, Sandby depicts one. It seems there was gender equity in supplying food for pets and stinking of meat. 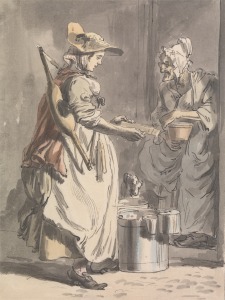 I’ve long been fond of the milkmaid, probably because she’s relatively clean, has a cloak for warmth, and I can understand what she does. As much as I love “Turn your copper into silver,” I lack real skill at charlatanry. And gambling. I don’t play poker: my face is too easy to read. Still, if you’re doing this right, there’s a lot to invest in being a milkmaid: kettles (likely pewter), measuring cups (tin? or possibly pewter), and a yoke. It’s a commitment. Cat’s meat– if you’re good with stank and have the right basket*, you’re pretty okay.

If not stank or drank, then gaming. It looks like the object of the game is to knock down the three balls at left in the background by hitting another ball, or perhaps a stone, with the stick. Ha’penny a throw? Maybe you just throw the stick. 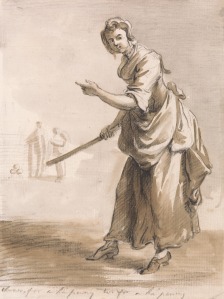 This is another instance wherein I am faced with historical things I don’t know nearly enough about: gambling and street games, pet care and keeping. Cat boxes: when we were they invented? We know cat litter is a 1947 invention, and that sand or ashes were used in cat boxes when cats were kept inside, but for the most part, they went in and out, and mostly out, until cat boxes and neutering became common, though an 1895 manual recommended that “the cat in civilization must be fed, looked after, and guarded in its moments of freedom.“**

Yes, I went there. I looked it up.

It’s more than 100 years after the time I’m investigating, but I don’t want to fall too far down this cat’s meat rabbit hole– but this does tell me that the historical images of indoor cats come with oat or straw filled baskets in sunny corners, and recommendations for galvanized pans filled with sand, clean earth, or sawdust, which may be ideal, as it can be burned.

Right, I need to focus and not entertain myself with children’s books about Old Dame Trot and her cat…dressed up. In 1810.

My point is, there’s a lot to sell on the streets of any town, images to support the material culture and reference books from which we can derive contextual clues to the impression of something as random as a cat’s meat man or woman. I don’t know that I’m leaping to be a Cat’s-meat-Woman, but it leads to a lot of interesting interpretive points about domestic life, pets, and families that visitors can relate to much more easily than street sales. Of course, if you choose to be the Cats-meat-Man, I won’t stop you from calling yourself Mr Friskies.

*See that flat do-da? I have a similar basket. It does appear one could hawk oysters from a basket like the one I have. Mmmm good.

**Huidekoper, Rush Shippen, 1854-1901. The cat, a guide to the classification and varieties of cats and a short treaties upon their care, diseases, and treatment. 1895: New York, D. Appleton and company

2 thoughts on “On the Street Corner”