Note: This was written some weeks before the Kim Sajet’s piece in The Atlantic appeared. Upon reading that, I decided to publish this essay.

Kehinde Wiley’s official portrait of President Obama hangs on a partial wall fronted by a velvet rope. Stanchions create an approach to the portrait, and people are lined up as if they’re waiting for communion, waiting to approach an altar. Which they are. The portrait is more vivid, more alive, in person than in print or online. The line of people–still long, still rapt, months after the painting was installed– is as moving as the portrait itself.

I knew I would like the portrait because I like the artist. The first Wiley I saw was at the MFA Boston, John, 1st Baron Byron hangs in a long hallway of a gallery, the chinoiserie background red and vibrant, loud the way 18th century wallpaper could be. Tendrils wrap around the subject’s legs, flat against the navy blue chinos, and without regard to the light that reflects from his palm. It stopped me in my tracks. 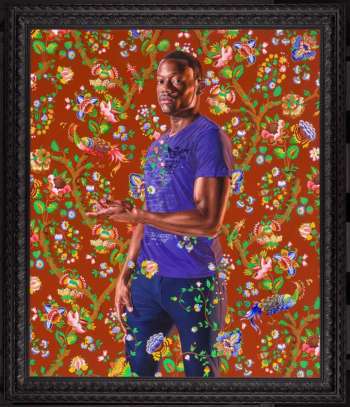 Obama’s portrait pricked my eyes with tears, not only for what I missed– the cool intelligence, the restraint, the reasonable domestic policies–but for the line of supplicants. There was a crowd of people who were moved the way I was moved, by the representation of a person. They were moved because of what the painting stood for, and how it represented the embodiment of an idea.

Shepard Fairey’s “Hope” portrait collage captures the beginning of the idea, Wiley’s portrait the mature realization. A copy of Fairey’s 2008 poster hung in my Providence living room, flatter than the original collage, stylized to a near caricature. Wiley’s portrait would suffer as a poster, print rendering the floral background lifeless, draining it of the light that saturates the portrait in person. The portrait glows on the gallery wall: Wiley has captured “hope” in paint and made it feel alive. 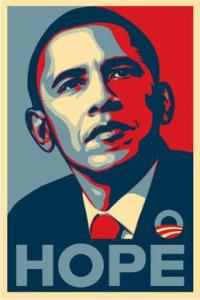 That light and life captivate viewers and draw them to the painting; they respond not only to what they know it represents, but to how the idea and accomplishment are represented. Watching people get in line to see a painting– no other presidential portrait, no other portrait, captured people’s attention and interest this way– proves not the popularity of a past president but the power of an object.

Wiley’s portrait, suffused with light, may be a modern altarpiece to the cult of celebrity, drawing crowds to worship an idol created by the media. Or it may be the physical representation of quintessentially American ideals of equality and progress, depicting a god of the mythical post-racial present. Or perhaps it’s a superficial representation of a superficial success, thin paint to match a thin pre-presidential resume. How we interpret an object is colored by our biases, but our response is not: our response is intuitive and automatic. That’s what I see in the queue to view Wiley’s portrait: people responding instinctively to beauty.

Sometimes I forget that no matter how interpretation and meaning layer an object, the first response is instinctive. It may be so fast we (almost) miss it, an impulse leaping across a synapse, but it is often the most honest response; the one we need to pay attention to so we can better understand how an object is presented to us or the public. The power is intrinsic to the object, whether an inlaid table or a portrait: the maker speaks to us through the object. Wiley’s portrait and the crowd who came to see it reminded me of that basic truth: the power is in the object. A curator’s label and presentation are secondary to the immediate response of the viewer to the object. There’s nothing like the real thing.