Boston Massacre planning is underway for everyone involved at every level, including me.

I’ve made changes to what I plan to wear, in part because I have a newer gown that fits better and keeps me warmer, and because I have learned more, and looked at more, in the intervening time. Since 2016, I’ve made/upgraded a quilted petticoat (in a bronze silk, a color documented to Rhode Island quilted ‘coats), settled in to wearing my cap tied under my chin, and made both a new apron and a new bonnet. 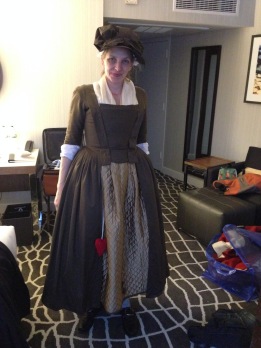 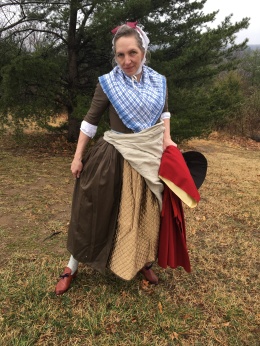 Cap and bonnet shape and shoes help make time period distinctions between 1777 and 1770; if I could find the wool I made the gown from, I would add the cuffs it desperately needs. The heeled shoes skew earlier than 1770, but they are the only heeled shoes I have….if the weather is wretched, I will wear the flats for safety and comfort.

The bonnet, which I affectionately call “Lampshade,” is meant to have the shape of pre-1770 bonnets as seen in Sandby’s illustrations, and which I have been working on for a while.

I know from reading the standards that the understanding of mitt material has evolved, and my time this morning looking for an elusive apron shape raises questions for me as well. Here’s Martha Collins, painted by Paul Sandby. What’s that black thing on her arm? A mitt? An arm warmer? Is it knit, or woven? There’s always more to figure out, and more to make.

Cuffs on my gown don’t seem like a big enough deal to warrant buying wool for a whole new gown (with only six weeks to go), so my choices are live with no cuffs, alter the red gown of 2016’s event to fit properly, or initiate an extensive search for the scraps left over from the green gown…which may or may not be buried in storage. Tick tock.

Happened on a Monday, by the way: how ironic is that?

But here’s the thing: if the Monday is emphasized, the Massacre stands out. Focusing on the normal makes the unusual ever much more so. And in the case of Monday, March 5, 1770, the usual is actually unusual. 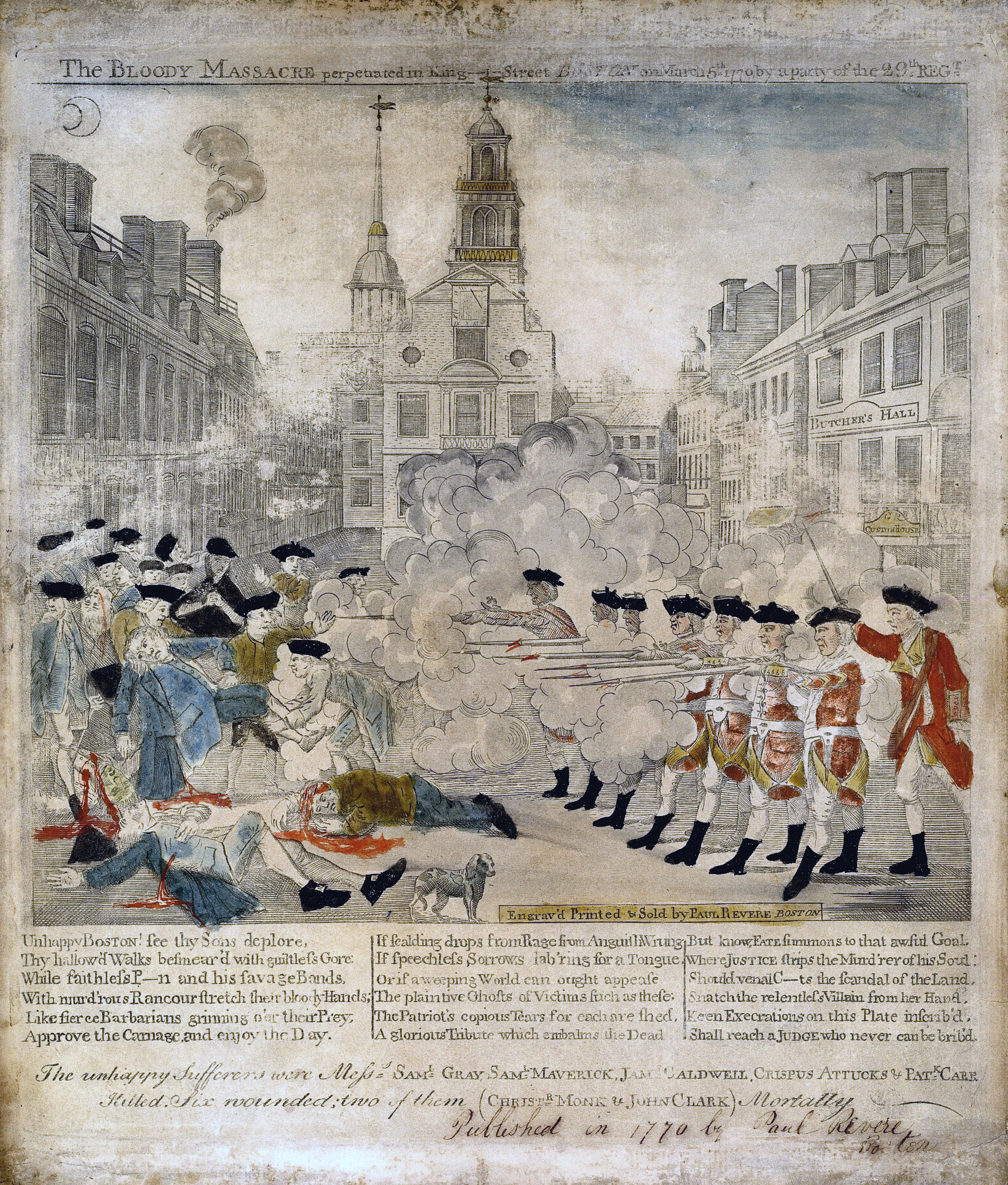 Over the course of the month leading up to Saturday’s event, Drunk Tailor and I spent a lot of time talking about the night watch, peddling, food supplies to Boston, population, and what I might call “the texture of everyday life” in a meeting at work. Any reading you do forces you to realize that the key to the Massacre is how very abnormal everyday life had become in Boston that winter.

By 1770, Boston was an occupied city: Ferguson comes to mind, or Ramadi. Soldiers and watchmen patrol the streets, civil and martial structures clash, and the Sons of Liberty chafe under this control– or attempt at control. Scuffles, fights, brawls, break out. A boy is shot to death– accidentally– and tensions mount higher.  Sailors and soldiers alike commit acts of vandalism. Women are assaulted. Normal isn’t normal anymore, and Boston was always expensive to live in. Even in a city occupied by “friendly” forces, gathering supplies and going about one’s daily business became harder.

People are scared. This is a tense city. Lots of people are just trying to survive. Lots of those people are children. Roughly 16,000 people, and if the estimates are correct, 2,000 soldiers and 4,000 men (white, African, other, free, indented and enslaved), which means about 4,000 women and 8,000 children under 16. Let that one sink in: lots of children, lots of teenagers. I don’t know about you, but a city with a large population of teenagers is going to be tense under the best of circumstances, even in an era before the rise of youth culture. Hormones, man. The kid can’t help it.

So imagine this: instead of a mobile monument and a commemorative ritual that substitutes fists for muskets, the Massacre commemoration expands to include the day, and not just the night. Monday and a Massacre.

Townspeople hurry home as dark falls. Women lug laundry back to customers or to the washhouse, or trundle barrows home, empty, after a day of hawking cats’ meat, oysters, or fish. Tired cordwainers trudge the streets, hoping for meat at supper. A mother scavenges firewood to warm her rented rooms, keeping an eye out for the watch. Those are not Mr Hutchinson’s fence posts, truly.

Women look over their shoulders, nervous at the sound of hobnailed shoes on the streets. Older men skirt closer to buildings, out of the way of soldiers in the street. Apprentices mock an officer, a sentry responds.

Insults, a scuffle, a boy knocked down. A mob, soldiers, a woman shoved, shots fired, men killed and wounded, blood on the snow.

Murder in the midst of the mundane. More horrifying (in truth, I have never heard Boston so silent as I did on Saturday night) within its context than set apart.

The Women of the 2017 Boston Massacre commemoration. Photo by Drunk Tailor at the behest of Our Girl History

The benefits?
A more complete picture of life in 1770 that puts the events of the evening of March 5, 1770 into deeper context and thus a sharper contrast.
A recognition that history isn’t just about men and conflict.
Understanding that what made living under occupation so hard was more the living– trying to be normal–than the occupation.
And, yes: more for women to do.