Now what? Now, my friend, the hard truths: the assessments and upgrades.

The hard stuff. Winter is a good time to frankly assess what you have, what you need, and what you already have needs. Could that sleeve be re-set? Stroke gathers re-done on an apron waistband? When you’re finally not planning and packing every few weeks, you have the time to really think about what you have and what you want.

There are two primary areas to assess, fit and appropriateness.

and the bonnet’s too big.

How well do your clothes fit you? Are your skirts long enough? Short enough? Are your breeches tight enough? Cut correctly? Waistcoats long enough? Getting dressed and taking a good look at your clothes can be enlightening. I find that photographs help me figure out issues with fit. As Drunk Tailor and I work, we take photos (especially of backs) so that whoever is being fitted can see what the fitter sees. This has proven more useful than attempting to turn around to see one’s own back like a cat chasing its tail. I’ve also used mirrors and selfies to achieve similar results, but even a non-sewing friend can take a picture of your back. 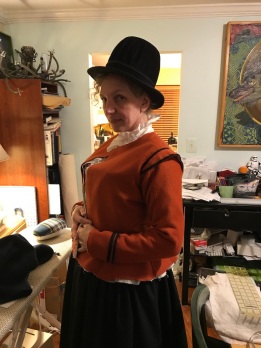 Now I can see what works 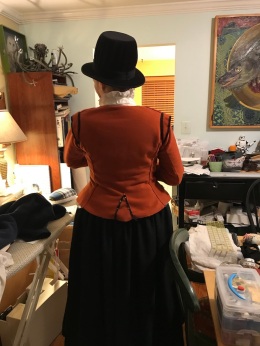 and what to work on.

Period-correct clothes fit differently than modern off-the-rack clothes (you know this), so looking at period images will help you figure out what you need to change. Typically, I find that sleeves are too loose, backs too wide, or bodices too long. Making the changes you need to make can be intimidating, but even 20th-century guides can help you get where you need to go. (The Bishop Method book is super useful if you want to sew vintage clothes, or just get better at sewing clothes in general.) More online sources for 18th-century techniques include the Early Modern Dress & Textiles Research Network , and Burnley and Trowbridge’s videos. 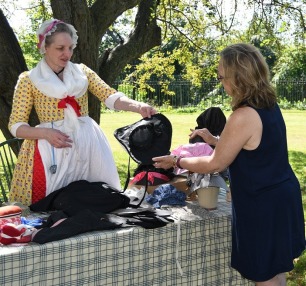 Purveying ideas and goods as a milliner is a lot like being a curator.

Do you have the right gear for your impression? Are the fabrics correct? Do you have the accessories you need? You know I’m not going to tell you what you need: that’s for you to figure out, but there are some good methods for figuring how what to wear and carry. (Soldiers have it easier: the sergeant tells them, and there are manuals.) For the rest of us in the 18th century, runaway ads are helpful and can be a good source of inspiration for ensembles. 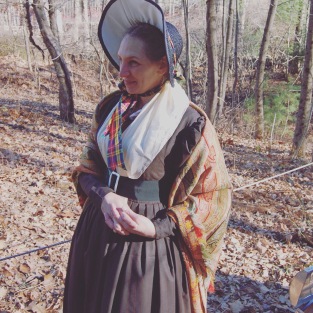 For other centuries, fashion plates and portraits can provide guidance and inspiration, and eventually, there are even pattern books and sewing guides. Small upgrades can make a big difference: in the course of a year, I improved my shoes, upgraded the scarf, and made both a cap a new and better bonnet. It took two more years, but eventually, I really upgraded everything. Sometimes it takes a while to get things right, and that’s okay.

It takes research, and there are some pitfalls (like confirmation bias) but Drunk Tailor lays out some avenues to pursue.  What you choose depends on who you are, so that’s always the place to start: who are you, where do you live, and what do you do? With those questions in mind, you can embark on making the changes to perfect your impressions.

As the Salem Maritime Festival approaches, my anxiety increases.

Whatever will those ‘gentlemen’ wear? Coats and waistcoats, and thank goodness I finished the Young Mr’s shirt and his farm trousers still fit. He has promised to be a very annoying runaway apprentice, and I have promised to chase him from the miilliners’ shop with a broom, but before any of that can happen, ‘gentlemen’ will need new waistcoats and coats.

I got out Fitting and Proper, and took a look at that coatee pattern. It’s a little earlier than I want, so I also looked at The Cut of Men’s Clothes. In truth, I did not draft up a pattern from scratch. I had a commercially available pattern that I’d purchased when it first came out, one that purported to be historically correct, researched, and came from a reputable company. 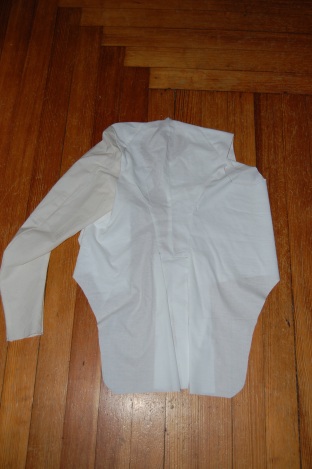 Well…so I guess the issue with the pattern is that the gentlemen in my household are not of the typically boxy build one may see streaming past tourist sites in Boston, or even lumbering across a field in historical uniforms. My gentlemen are built for the Light Infantry, so when I finished the first muslin (or toile) of the coat and fitted it to Mr S, I removed inches–yes, inches–of material along the side and center back.

I suspected this would be necessary when I first traced the pattern pieces, but went ahead because you really have to mark up a toile on the body in question to get the fit correct. Maybe it’s just this many toiles because I’m inexperienced. 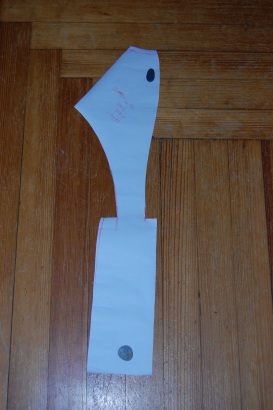 In any case, the armscye and upper shoulder seam were re-drafted, the drape and sweep of the tails, the width of both side and center tails, the side seam of the body, and both seams on the center back piece, which originally had a flat center back seam (I ask you!), a shorter shoulder seam, and a different side seam.

I’ve left the tail length short and after toile number 4, will mark the final tail length for both gentlemen (luckily we are at a sweet spot where this fits Mr S well and the Young Mr passably, so that with minor adjustments for the lad, a second coat could be made at some time).

I still don’t believe the tail pleats entirely, but lack the time this week to draw them from an original. They still seem too wide, though I have taken an inch or more off every tail edge.

The last thing to really wrangle, after bringing the under arm seam back up, is the sleeve; the upper arm is too long, reflecting the fact that the basis for this sleeve is my Spencer sleeve, which traces its origin to Mr Cooke’s linen suit coat pattern. Both Mr S and the Young Mr have shorter humeri and femora, which put the elbow crook on their forearms which looked rather silly and uncomfortable.

In the end, the pattern I had proved useful only in saving me from the math of enlarging a pattern from a book– it got me full-scale immediately, so that I could proceed to fitting–but this project will, when it finished, reflect multiple fittings and four pattern drafts.

If there is a moral to this story, it is this: Almost nothing will fit straight out of the book or the envelope, so leave plenty of time for catching your subject and fitting muslins.

Another moral may be, “Buy muslin in bulk,” which I did thanks to a clearance sale. I’ve already used 2 yards off the bolt I bought Saturday afternoon.

There is good, if slightly terrifying, news about how to get better at sewing. It took me two years to get to a decent place, but this sped up considerably in the past year because of the weeks when I sewed for 30 or 40 hours a week. This business is about practice, looking, and patience … and also asking for help. Some of the help you can get online, some of the help you can get from whatever human is handy, and some you need a master for.

The Rhode Island pair, pattern by me based on Mill Farm breeches.

Online tutorials have saved my bacon: I make gowns with Koshka’s tutorial handy because after intensive menswear, I forget how this gown business works. The random human help I get comes from Mr S, who patiently takes photos as I try to fit backs or see what’s wrong. Trust me: you cannot see your own back in a mirror, so take a photo, or get someone else to. The masters who have helped me are Sharon Burnston and Henry Cooke. From both of them I’ve learned how to look and how to think about historic costumes. Sharon’s workshop really helped my sewing, and watching Henry has taught me a lot about fit. Also from both: patience.

When it came to Mr S’s overalls, I needed a professional bail out. Mr Cooke offered to help after watching me basting the things at MMNHP, and here’s what I wrote in reply:

[the] overalls have reached a rather bad place, and are now only half-basted on the legs after a third fitting attempt. He appears to have lost more weight. The fit in the seat confounds me, and when I get one leg right, the other twists. Your help would be deeply appreciated…

In the end, my basting was ripped out and Mr Cooke sat on the floor and basted the overalls on to Mr S. The process took a bit more than an hour, during which time Mr S became very familiar with the curtain material in Mr Cooke’s workroom, and realized that it was identical to the curtains he’s had as a child. This memory transported him back to a childhood trip to Williamsburg, when he yearned to be one of the costumed interpreters at CW. It was a transformative afternoon for Mr S and his overalls.

Now that they’ve been worn, I know that I need to:

There is hardly any seam allowance over Mr S’s single-speed bike-riding-up-hills calves, so a pattern from the legs would make the next pair that much easier. He has two pairs, so why should I bother? Because he will undoubtedly wear these out doing as many belly crawls, stream fordings, nettle bush tangoes and other light infantry activities as he possibly can. At some point, mending will cease to be an option.

So how would I pass on the lessons I’ve learned? In some ways, by writing honestly about the struggles and successes in getting these things right, and to let you know that practice really does make a difference. It’s also become clear that maintaining an open, curious mind willing to accept criticism and new ideas will make you a better sewer, and maybe even a better living historian/reenactor…dare I say person?