Hunting frock from the side. Just two sizes of one curve

I drifted away from the HSF. While, at some point, I had plans for HSF #11: Squares, Rectangles and Triangles, and they were even written down somewhere, something like table clearing and recycling happened…but, hey wait a minute, if you will allow me one curve done twice, I give you the Hunting Frock! (also, the checked bag).

Since there was a search for “best rifle frock for rev war reenacting,” I think this probably bears going into.

Presented, for your consideration, The Facts.

Without fringes or hem

Pattern: Cut by Mr. Cooke, who used a yardstick, chalk, and an extant shirt (for the cape curve). I have watched him cut two now, and it’s pretty cool.

Notions: Does thread count? That’s all this takes. 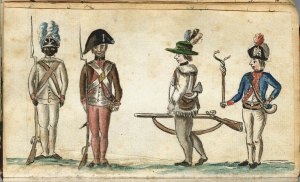 How historically accurate is it? Based on Mr. Cooke’s research into the hunting shirts worn by Massachusetts troops, and revised to reflect recent research by Neal Hurst, this frock pattern reflects the most current, accurate representation of the hunting frocks (sometimes called shirts) worn by Continental troops during the American Revolutionary War. The garment is entirely hand-sewn using, as much as possible, the correct (thankfully basic) stitches. Flat-felled seams, all that good stuff. Any place it is incorrect is purely my own genius.

Hours to complete: Remember those soul-crushing hours? Yes, these were among them. Actually, no, it’s not too bad. Perhaps twenty-four? You can power down on one of these, but even once you have the initial fringing done and the fringes attached, you will have more thread-pulling ahead of you.

Total cost: $45, for the linen and the cutting. Your mileage may vary, as the Young Mr and Mr S are in the regiment for which Mr. Cooke is the adjutant. 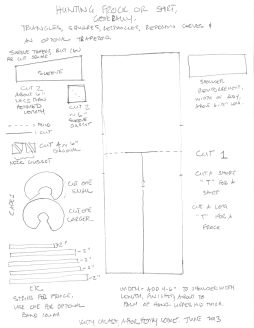 To the person looking for the “best rifle frock for rev war reenacting,” I have to say, it depends. If you are with a Rhode Island regiment, for example, the linen you choose could be brighter, to reflect the fact that the state called for “whitened towcloth” for hunting frocks for Rhode Island troops. I have found some I think might be likely at Burnley and Trowbridge, but I have not checked it with the RI captain. You need to know if your regiment or group favors hunting shirts (pull over) or hunting frocks (open down the front), and then you need to figure out what kind of linen they were wearing in the period.

But, like a shirt of the period, these garments are very simple: triangles for the gussets (or squares), rectangles, and just the curved cape. The pattern (schematic) at right is adapted from what I have seen Mr. Cooke cut, which is quite similar to the Brigade of the American Revolution pattern I had for the Rhode Island frock I made (also entirely by hand). Since these were so close to shirts, they would have been very easy to construct, and since they’re large, measurements could be generalized. The BAR pattern does not use the under-arm gussets, and the sleeves are not tapered; there is more fringe on the standard Rhode Island frock than on the Massachusetts frock, but there seem to have been variations at the time.

You may also wish to consider whether or not there is a difference between hunting frocks and rifle frocks (I do not know, please don’t ask, I wasn’t told this would be on the test).

For more, here is Neal Hurst, on Fringe on the American Hunting Frock. You can read it before or after you pull threads out of those two inch strips until only 6 to 8 remain in the center. Happy fringing! 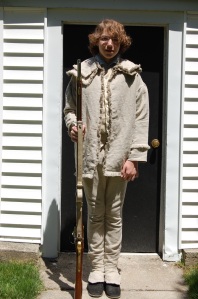 The Young Mr was allowed to carry a musket in the Warren Memorial Day Parade. I do not love a parade, so I didn’t go. But he had no overalls of suitable fit and they were so nearly done, that I resolved to finish them, and finish them I did, in time for bed on Saturday, no less. It’s all thanks to BBC’s brutal but entrancing programming. My sewing better to blood curdling screams (also courtesy ITV), which seems awful but there it is…though the darkness of Mad Men has proven good for back stitching, decent button holes require murder. 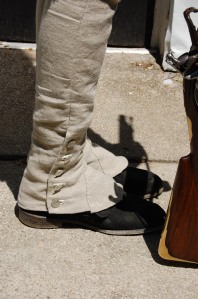 Fifteen button holes, multiple fittings, and some curse words have resulted in a pair of decent-fitting overalls that did not split at the knee or stretch too extremely when worn. And atop it all, in the yard if not in the parade, the new model hunting front adopted by the 10th Massachusetts. The Young Mr is uniform-forward as Neal Hurst’s research has led the adjutant to conclude that the men were wearing frocks, and not shirts. (In the Rhode Island records, I found that rifle frocks were listed until 1780/1781, when the Records of the State of Rhode Island began to indicate rifle or hunting “frocks or shirts.” That’s a wrinkle for Mr Hurst, but I saw only frock in 1777-1780.) 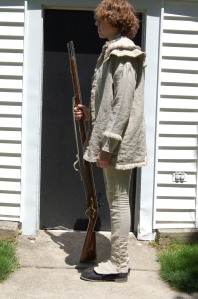 The fringing is a task completed by Mr S, who has fringed the strips for his own Rhode Island hunting frock, and now knows what fun awaits him as another frock will made for him. My goal? Another complete 10th Massachusetts kit by June 15. I’ve sewn buttonholes in a moving car before, and I expect to be felling seams or sewing buttonholes as we travel down to New Jersey. They’ll be fine; after all, the traffic is murder. 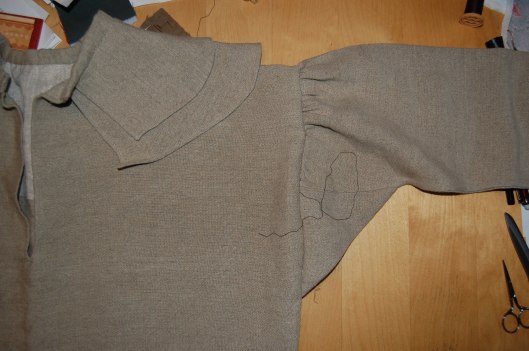 Dante’s Own Infernal Sleeve of Poof

Twenty-four hours on, this is where we are: Poofy, shoulder-popping sleeve of doom. How can that be a uniform sleeve?

Well, Pilgrim, this is how: 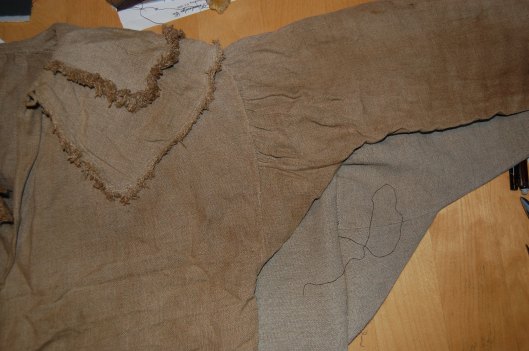 So glad I have that near-feral hunting shirt, because without it I would have ripped this out completely. Could the Poof of Doom be there to allow movement?

Subject was detained for photography. 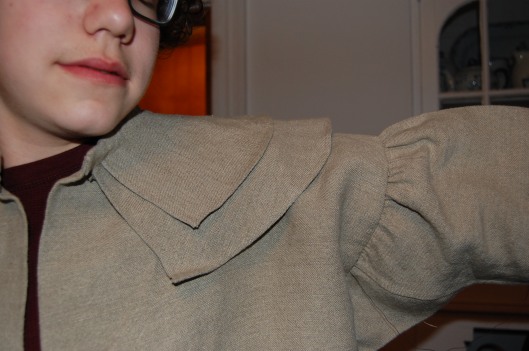 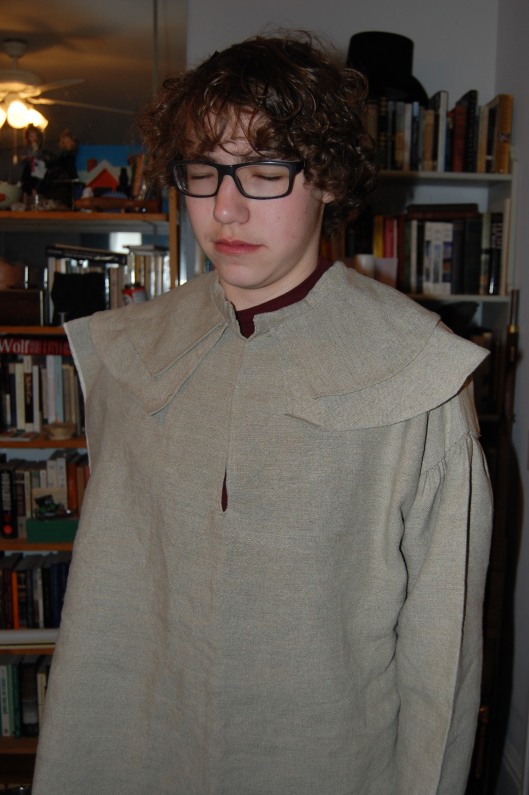 I do feel sorry for him, but at the same time, I have to fit it to him.

It’s possible that the poof at the apogee of the shoulder is due to the intense pressing I gave this to retain the center line, and the fact that, despite washing, the linen is still pretty stiff. When I compare the two– the completed shirt and the in-progress shirt, I can see that while both display a tendency to drift up, the gathers on the adjutant’s shirt are more evenly distributed. You know what that means…and that’s why the sleeve is only basted in. Might as well change it now as on Sunday, because it must be done. So in the end, I am ripping it out completely, but with the knowledge that 1) the upward angle seems to be correct as shown in the finished garment, and 2) evening out gathers may reduce the Poof of Doom.