One of the things I liked best about this year’s School of Instruction was the Petite Guerre demonstration that followed a discussion of those tactics by Dr Stoltz of the 5th NY. 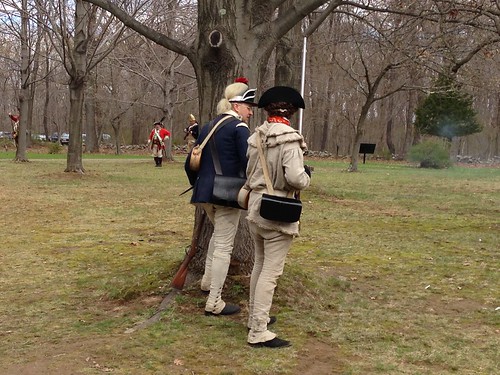 Demonstrating skirmishes instead of linear warfare makes sense, given the numbers of men who take the field at events, and the smaller engagements will reflect exchanges common between the sides during the war.

What I like in particular is that using ‘petite guerre’ tactics requires the commanders and soldiers to tailor their actions to a site (site specific immersive experience: you cannot go wrong) and as the action unfolds, soldiers at all ranks are forced not only to move but also to think. Any action where the interpreters have to think is likely to create a better experience for visitors—and no great surprise, that usually makes a better experience for interpreters. It also flatters the site managers and visitors, who will appreciate that you’ve taken the time to explore and understand their place, and its place in history.

While you don’t necessarily want to fight the Battle of the Comfort Station, skirmishing around a site with buildings provides an objective, while multiple buildings and some woods or undergrowth provide cover for the Light Infantry troops and opportunities for deceit.

Of course, depending on troop size, it may be that each man needs his own tree. On Sunday, the Young Mr kept close to Mr McC, demonstrating troop [leg] length. 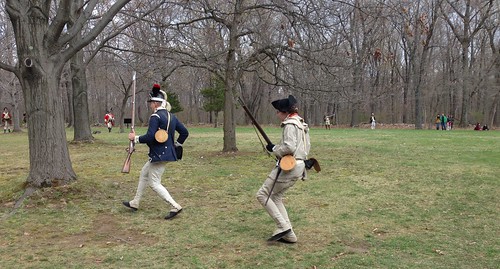 It’s hard to be invisible when you’re tall.

But I do mean this seriously: scaling events to available resources allows for a better interpretation.

That’s common sense, and sound museum practice, and that’s pretty much the business living history practioners (aka reenactors), are in: interpreting the past to visitors. Best practices for professionals and hobbyists are grounded in the same principles:

Building an encampment and tactical demonstration on the first two principles grounds the event in in historical authenticity. Adding the third principle, and increasing the use of smaller group tactics, tailored to the participants and site, would be a subtle but strategic shift to build a more engaging experience that better educates visitors and might even attract new recruits. 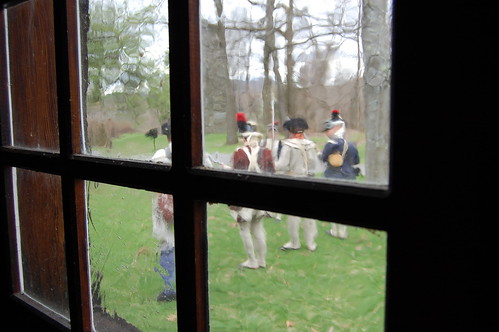 What Lights through Temple window Break?

What do you do when the kettle tilts off the pothook and spills onto the floor?
Scoop the food back in and keep cooking.

That’s how you make dirt stew, with just enough ash to keep the texture interesting at the bottom of your bowl, plus ham, onion, turnips, parsnips, potatoes and carrots. If you wash the inside of the kettle later in your motel bathtub, you will add to the list of very bad things you’ve done in the bathrooms of temporary accommodations.

On Saturday, the original event plan called for a camp kitchen demonstration; this was nixed because a long string of permissions could not be obtained in time, so we fell back on bringing the three sticks and two kettles. Outdoor fires of all kinds were nixed Thursday because of red flag warnings, and after downpours Friday night followed by rain on Saturday afternoon, we ended up cooking in the back room of the Temple building. 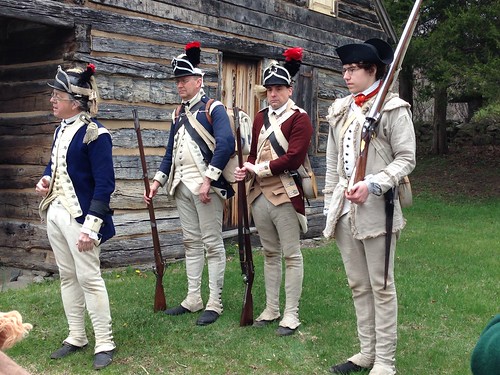 Third from the left, Mr S in the ‘Ugly Dog’ coat.

Some of us were too focused on getting food into the kettle to tidy up the surroundings, and that is why you need several people in any group: someone has to keep their head and clean up the wreckage of previous occupants. Fortunately for us, Mr McC managed that while the Young Mr swarmed around like a cat wanting its dinner, I cut vegetables and Mr S stewed about spilling the stew.

In the end it was a cozy evening boiling roots and hearing stories. I took no photos because that would have ruined it, but Mr S kneeling before the fireplace in the Ugly Dog coat and overalls as the last of the light came through the watery glass made a Vermeer-like and beautiful sight.

On Sunday morning, Our Musician Friend (who has turned his coat, and now sports yards and yards of lace and a bearskin hat nicknamed Lamb Chop), produced a package of Oreos from his haversack, and the Young Mr and I took the King’s Oreo with pleasure and no commitment.

On Saturday morning, I gave a presentation at the BAR School of Instruction on Interpretation. The slides are above, and the presentation (with my notes) is here.

The handouts and bibliography I used in thinking about Bridget Connor an be found on the Interpretation 101 page.

This weekend, we’ll be at the Brigade of the American Revolution’s School of Instruction, taking anxiety to the Hudson Highlands as I give a presentation on interpretation. Sure, it’s part of my day job to interpret objects and documents and even, sometimes, to do costumed interpretation, but experience has never prevented me from worrying. It has allowed me to focus my worries more productively and specifically. One of the things we’ll be trying, or attempting to try, are vignettes based on the shirt-stealing and selling ring of 1782.

* Events are extrapolated from the Orderly Book as things that must have happened to cause the events that followed.

We’ll see…in the meantime, I’m finishing up a shirt for the Young Mr, so that his small clothes will no longer be too-small clothes, and so we have extra shirts for this black market ring.

Everything I think I know about courts-martial I learned from the movies (The Caine Mutiny and Breaker Morant, or Paths of Glory) but thankfully I can realize that knowledge is probably not so applicable to Bridget and her context.

Thanks to Yale, it’s easy enough to find the  Rules and Orders for the Continental Army, as set down by the Continental Congress in 1775. I don’t have to know this, the guys know it, but it’s helpful for me to understand what’s happening. I also figure Bridget would have known how the system worked (or should have) since she was part of it, and would have observed life around her. In the same way that I understand the  organizational politics and policies of my workplace, she and the soldiers would have understood the rules and regulations under which they lived and worked.

In the first case, remember the shirt-selling soldiers? Here’s the regulation they were breaking:

“Art. XV. Whatsoever non-commissioned officer or soldier, shall be convicted, at a regimental court-martial, of having sold, or designedly, or through neglect, wasted the ammunition, arms, or provisions, or other military stores, delivered out to him, to be employed in the service of this Continent, shall, if an officer, be reduced to a private centinel; and if a private soldier, shall suffer such punishment as shall be ordered by a regimental court-martial.”

There you have it: they sold provisions or “other military stores” delivered to them to be employed in the service of the Continent, and suffered such punishments as were ordered.

And Bridget? Well, for one thing, she should have known she was subject to the articles, rules, and regulations. She was one of those “all persons whatsoever.”

Technically, I cannot find anything stating outright that one could not buy issued goods from the soldiers to whom it had been issued, but since selling it was wrong, receiving was wrong, too.

We know from the final punishment that Bridget probably breaks yet another article:

“Art. XL. No person whatsoever shall use menacing words, signs, or gestures in the presence of a court-martial then sitting, or shall cause any disorder or riot, so as to disturb their proceeding, on the penalty of being punished at the discretion of the said court-martial.”

I think the “the Insolence to the officers of [the 10th Massachusetts] Regiment” may have taken place at the court-martial, given the swiftness of her punishment.