I managed, with sore fingers and considerable snake-eyed concentration, to get breeches and coats finished enough to send these two off to Battle Road better dressed than ever before. I’m pleased indeed with how the blue suit turned out, and planned to make a blue wool waistcoat to complete the set. Except…the Young Mr prefers some contrast in his clothing (a change from his prior preference for complete camouflage) and now wishes for white. I ask you.

Mr S is need of a new waistcoat himself, and he’s registered for a workshop with Henry Cooke to make a new waistcoat for himself. He was awfully taken with Mr B’s clothes two Saturdays ago, when he dressed as George Claghorn, the Naval contractor who supervised the building of the USS Constitution

Plush. No, really, it’s made of plush.

L’Hermione is coming to Boston and Newport in July, and then we have An Afternoon in 1790 planned, with What Cheer Day not far behind, so there’s plenty of need for new waistcoats in a variety of styles– 1780, 1780, 1800 each have their variations.

Why not join us May 2nd and 3rd in Providence, and make your own fabulous waistcoat? There’s still a space or two left! Register here.

I went to Newport yesterday for a History Space program on material culture. I don’t know why I  was nervous, really, because I love stuff. I try not to accumulate too much stuff in my own life, and to be a careful curator, but really: beautiful objects make me really happy, and I love talking about “the thingness of things.”

Living history is fun for me for a lot of reasons, some esoteric and personal. I spent a lot of time in school thinking about images of America, and what they meant (it was the age of semiotics and Derrida) so creating living history personae and clothes and based on images and research is a way of making art of history, or else dressing up in funny clothes and enjoying loud noises.

Historical research is most fun when it asks questions– the journey is as good as the destination–and there are good questions to ask the things you carry with you or use in living history. (They’re probably good to ask if you’re in a mood to downsize at home, too.)

If you can answer those questions, you’ll be a lot closer to knowing the why of what you have.

It’s the stories we tell about our objects that give them meaning: sometimes it’s who made or used a thing, sometimes the story has a meaning that you can’t tell from the object itself.

Think of this: I crossed the Pell bridge last night to come home, the road climbing into a storm cloud, the car lashed with rain and wind on a road surface daguerrotype-reflective and hard to read. The buffeting gusts on the car reminded me of the carpenter who didn’t like crossing the bridge to work in Portsmouth. Still, he told a story about crossing the bridge in storm on a motorcycle, with a girl riding behind him. The wind would rise, you’d both get scared, and she’d squeeze closer. He shivered inside his t-shirt as he told the story, with a tiny smile, and you knew he’d gone to Newport in that weather, on that bike, with that girl, on purpose.

You’d never get that story just from a jacket, a helmet, or a bike, but somewhere, there’s a object tied to that story.

Where will you be on March 28th, now that the LTB muster is cancelled? How about HistoryCamp 2015? You can register here for free if you volunteer or for a nominal fee otherwise.

You can check out sessions here, but I know there’s a really good one on living history…because I’ll be presenting along with Elizabeth Sulock of Newport Historical Society in the Risky Business: Living History Events in Tradition Museums session. There’s a lot of other good stuff, too, so if you’re in the area, why not register so you can check it out? 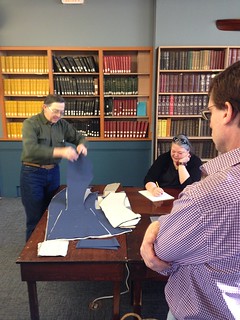 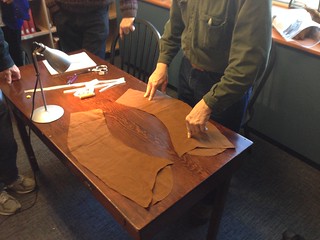 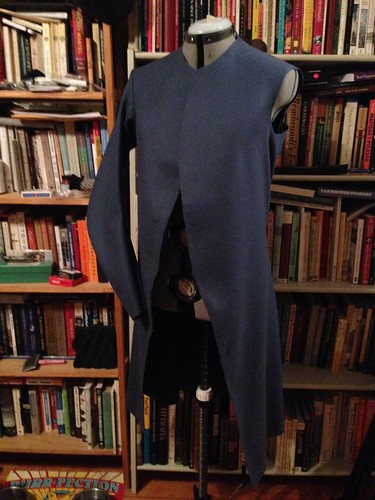