First come the jewelry sales, the big guns like Sotheby’s leading the way with sales as crazy as Marie Antoinette’s jewelry (Royal Jewels from the Bourbon Family of Parma, technically, though it sounds more like a delicious lunch than a sale), but the smaller houses play, too. Skinner’s sale closed December 5, Freeman’s earlier, but later than Sotheby’s. These are not sales I bid in, but they are places to see things you’d might not otherwise see. Garnet bracelets with rose-cut diamond flies? Not something I see gracing the wrists of my fellow Metro riders or grocery shoppers.

Once the serious stuff has sold, the fun begins: the toys! Pook and Pook’s two-day toy sale begins December 7th, and you might call it whimsies and toys, since it begins with shop signs. Who doesn’t want an enormous tin hat? What’s the point, you ask? Why look, if you don’t collect? Because you can collect– information, screen caps of reference images, ideas for things to make, and a visual reference library to fill in the blanks of what you read. The steam engine that breaks in The Railway Children seemed crazy to me as a child, and I assumed it was just a model of a steam locomotive. But no: there were steam toys and accessories, from lighthouses in moats with Indians in sailboats to working looms to….steam locomotives. 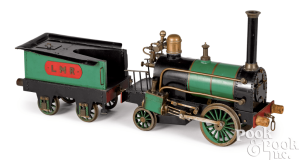 The darling thing even looks like Percy, filling in the gaps of the origins of Thomas the Tank Engine, Edwardian children’s stories, and the wonders of the steam age (which you can replicate, if you choose). Hard to believe, in our age of safety, that steam engines might be de rigueur in the parlors of well-to-do Victorian and Edwardian families. (Perhaps your childhood was not as full of E. Nesbitt, Kenneth Grahame, and Arthur Ransome as mine, but if your mother’s primary caregiver was born in late 19th-century Great Britain, you might grow up with an attachment disorder and a taste for fabulist literature of the early 20th century.)

And then there are the dioramas or room boxes, many, if not most, German. These early 20th-century displays give us a sense of the kinds of craft or hobby activities people enjoyed, front-facing dioramas. I think you either “get” them, or you don’t; not everyone wants a miniature world to control or fantasize about, but from the perspective of someone trying to understand what the past looked like, these can provide a three-dimensional view of what are usually only black and white images. Are they perfectly correct? No. But they do give us a sense of the kind of visual stimulation people encountered and enjoyed shopping and playing.

There are dolls, always divisive (they’re creepy or cute, few folks fall in between) and they have they own usefulness. None in this Pook sale tell us much about early toys, but there are a couple of early 19th century examples to remind us of what children played with in the past, and how new fashions were disseminated. In the case of the milliner’s model doll at left, we get a good sense of the Apollo’s knot hairstyle, and a pair of red slippers I would love to have. The back view is equally useful, for it is only with three-dimensional objects (dolls or sculpture) that we can get a complete sense of a hairstyle or costume. With enough looking, you can extrapolate, but there’s nothing like being able to see the past in the round. That’s even better than the telephone-book-thick catalogs from Sears and J.C. Penney that arrived before the holidays in decades past.

I’m in this business, so I shouldn’t be bothered. I have been a seller and a buyer, and I’m a card-carrying member of Team Hoarder, AKA the Curators. So why does this bother me?

This sale features a strong selection of modern authors highlighted by Property from the Descendants of William Faulkner, including the manuscript of his Nobel Prize speech with the gold Nobel medal and diploma (1950), autograph letters written to his mother from Paris in 1925, the typescript book of his poem sequence “Vision in Spring” in a handmade binding by the author, drawings, corrected typescripts and other items.

You’d think I’d know better by now: Life isn’t an Indiana Jones movie, and no amount of saying “It belongs in a museum!” will help matters along.

More and more I see the cultural economy–and the disposition of cultural goods–following the “winner takes all” pattern of the larger economy. I give you Walmart, and Walmart gives you the Crystal Bridges Museum of Art. The FAQ’s deny any tie to Walmart stores, but Alice Walton founded the museum. For a lot of people, that’s a connection to Walmart. The claim that there is no connection seems even more disingenuous when you visit the homepage and read “General admission to Crystal Bridges is sponsored by Walmart. There is no cost to view the Museum’s permanent collection, which is on view year-round.”

The people of Arkansas deserve a nice museum; everyone does–that’s not my point. My point is that private collectors can buy, and keep from public hands, important pieces of material cultural and cultural heritage. Faulkner’s work post-Nobel may have paled compared to earlier work, but he won the Nobel–score one for Southern Literature and the power of Faulkner’s words, the sway he held over American letters.

Would an online photo, or a magazine photo, of Faulkner’s medal ever be as good as the online version of Joyce’s reading? No,  I don’t think so.  Because there is a power in the authentic, in the real. And the medal is material, three-dimensional: sound waves over an internet speaker wouldn’t be as frisson-inducing as listening to a recording in a darkened library, but they’re still sound waves.

Authenticity will be the subject of an upcoming session at AAM’s Annual Meeting in Baltimore, and though I can’t be there, I’m following as best I can.

Authenticity is something reenactors strive for in their work. Museums present authentic– real– objects and experiences. I sit the gallery and one of the most common questions people ask is, “Is it real?” and when told, “Yes, it is,” they gasp a little.

So when museums and libraries are priced out of the auction or private sale market, what does that mean? It means less public access to authentic items, to the “real,” three-dimensional evidence of the past.

We’re choosy, of course: it could well be that the University of Virginia did not want these items. Perhaps they did not contribute materially to Faulkner scholarship–the medal wouldn’t, really, would it? But the additional papers and letters might, but would be hard to justify at $250,000-$350,000.

That’s a chart of the 2011 income for the Met, the MFA, the RIHS, and the Newport Historical Society. All four have decorative art, art, and textile collections. All four would be interested in pieces of Newport furniture. Two are art museums, two are historical societies. Only one has the financial power to bid for major pieces.

And then there’s Crystal Bridges: 2011 revenue? $625,995,749. Sorry Met, you were just outdone by $155,947,709. Over one hundred and fifty-five million dollars. Dr. Evil is beyond impressed. The Crystal Bridges Form 990 includes a donor list with $700,000 from Cisco Systems. Nicely done. With endowment return of just a little more than $16 million, and  $37 million for “museum procurement expenses,”  they need those donations to stay healthy financially. But that $37 million buys a lot of art.  And where does that leave smaller museums and collecting organizations?

And what does that mean for Faulkner’s papers, or a Plunket Fleeson chair?

Chances are they’ll be in private hands, accumulating value.