One must keep up with the news (and the competition)

I’d call it “three times a lady,” but truly, I’ve only been a lady in Occupied Philadelphia twice. Last year and this year, I portrayed Elizabeth Weed, a widowed pharmacist living on Front Street in 1777 with her son, George. We don’t know why Elizabeth Weed didn’t leave the city along with nearly half the population. Was she a loyalist? Was her son too ill to travel? Or did she choose to stay to protect her property from the British– or the son of her late husband’s first marriage, who withheld a portion of the estate? Whatever the reason, remain she did, advertising her wares in the October 23 edition of the Pennsylvania Evening Post. 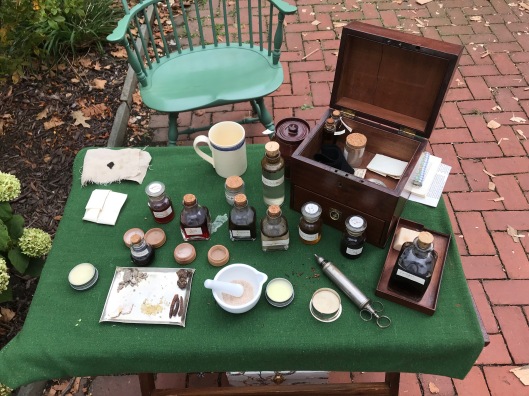 Last year, with Drunk Tailor’s assistance, I made a number of remedies using 18th century receipts, with some interesting and sometimes successful results. This year, we improved one– the yellow basilicum ointment– and added some new concoctions. The sulphur ointment for the itch (possibly scabies) worked well on the insect bites I got in the Carpenters Hall forecourt. A charcoal-oyster shell-cinchona bark-benzoin tooth powder was a new addition. I used the clove oil-scented pomatum to achieve the highest hair I’ve managed yet, but the truly satisfying work was recreating multiple recipes actually used by Elizabeth Weed.

As Drunk Tailor notes in his entry on this year’s event, we can never truly enter the 18th century mindset. Recreating the clothes, food, daily rhythms, and medicines help us experience the feel of the past, but we can never truly be those people. If you regularly cook 18th century meals, you’ll experience the palate of the past: aromatic, relying heavily on cloves, nutmeg, cinnamon, and allspice. This same range informs the aroma and flavor of the remedies from cough syrup to tooth powder.

Almost undoubtedly one of the ‘smells like Christmas, tastes like death’ tooth powders. Courtesy Jason R. Wickersty/Museum of the American Revolution

It’s a toss up which is less pleasant to the modern tongue, the Syrup of Balsam or the Syrup for the Flux. Both use the “paregoric elixir,” which some of you may recall from the medicine cabinets of old. Camphorated tincture of opium or anhydrous morphine has been used to treat diarrhea for centuries, and the ingredients for the modern version (anhydrous morphine) is remarkably similar to that for Weed’s paregoric elixir:

There are some differences– most of us don’t want to ingest camphor, and “purified water” isn’t quite a thing in 1777– but the active ingredient makes these essentially the same compound. It’s an essential component of both Syrup of Balsam and Syrup for the Flux, so it had to be made first. Over the course of ten days, the elixir cleared from a yellow-orange slightly opaque liquid to a clear yellow liquid, with white sediment at the bottom of the jar (probably the benzoin).

With that in hand, I was ready to tackle Weed’s most famous (and well-protected) remedy. It appears more than once in the daybook, but both listings use the same ingredients and proportions.

One of the original receipts for the syrup for the (Bloody) Flux. UPenn Ms. Codex 1049

“Mix them all together, and stop them up in a bottle for life.” (Or, as the other receipt says, “Mix and Digest.”

The resulting mixture is probably meant to soothe the intestinal cramps (with anise, fennel, and peppermint) while the paregoric relieves the endless diarrhea. Licorice-flavored molasses with a peppermint tingle isn’t unpleasant so much as odd to the modern palate. 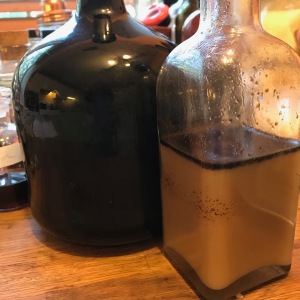 “These must be mixed together, and then put up for use.”

If I attempt this again– to be fair, I have enough ingredients and more knowledge– I’ll try to get the Balsam of Tolu to dissolve more fully into the main mixture, though I doubt the separation is why the taste is so unforgettable. While it did mellow after several days, the basic flavor remained licorice cough drops dissolved in corn liquor with an afterburn of turpentine. Fortunately, the dosage is not by the spoonful, but rather ten or more drops in a wine glass of water, depending on the constitution of the patient. As a “cure for the whooping cough,” the syrup with fennel and anise was probably intended to soothe the throat, and paregoric might have helped the pain of damaged lungs. Living in the post-DTaP era, I’ve never had whooping cough, or been around anyone who did, so it’s much harder for me to imagine treating it without antibiotics (or simply not getting it).

“No, really, no antibiotics!” Photo by Jason R. Wickersty/Museum of the American Revolution

That was really illuminating to some people: antibiotics weren’t invented until 1928 (in the case of penicillin) and were not available for civilian use until March, 1945. Until then, diseases like strep throat could be fatal. Often, the best medicine in the 18th century was to help a patient be comfortable, and ease their symptoms.