Once upon a time, I worked (twice) for an interim boss I called (behind his back) Shiny Buttons. You know I’m in a coastal state, so you can guess what he wore: a navy blue blazer with brass buttons. It’s a uniform of its own kind, even in civilian life. For a new show at work, one of the things we’re looking at are blue coats and shiny buttons.

It got very “Hey, sailor!” in painting storage earlier this week, as we pulled out portraits looking for gents in blue coats. Sea captains are definitely representing.

There are other gents in blue, and it’s interesting to see the proliferation of style across time.

It’s a classic look, often seen in the preppier enclaves. It’s an easy target, but don’t you love this review of a Brooks Brothers blue blazer by Biff? Timeless.

It’s auction season in antiques land, and the catalogs arrived at work smelling of money and expensive ink. Sotheby’s Folk Art and Americana sales offer some lovely pieces  at the end of this month.

Mrs (maybe) Greene is a pretty fantastic painting, even if John Durand lacked the grace and skill of Copley or Feke. There is an airless quality to these paintings, though the details are fine and the contrast between the husband and wife in presentation is delightful. My favorite line of the catalogue entry is the final one: “When juxtaposed to the drab coloring of her husband’s portrait, Mrs. Greene can clearly be perceived as his adornment, a fertile beauty in the flush of womanhood.”

Egads, right? I suppose she could be, but I also suppose she could be a fine way to flaunt his wealth and success while he projects fiscal and mercantile stability and restraint. Without a solid link to actual people (and there isn’t) it could be that more is happening in these paintings than the woman serving as the man’s adornment. If you read the footnotes, you’ll see that the attribution to Newport is slim (it’s a story without a real source). If a Mr and Mrs Fitzhugh Greene lived in Newport in the 1760s and 1770s, they’re not buried in RI. They could be Loyalists who fled– auction catalogs are a fiction writers dream of inspiration– but so far, no solid evidence links these portraits to Rhode Island.

In terms of documenting a man and a woman of substance in 18th century America, or the material aspirations of those men and women, these portraits are interesting whether the clothes and jewelry Mrs (maybe) Greene is wearing are real or not. Because they could be fabrications.

Mr (maybe) Greene is firmly real. The frock coat, waistcoat and breeches are all presumably made of the same fine brown wool broadcloth, worn with a fine white linen shirt and stock adorned with lace. The buttons are interesting, and neither the zoom nor my nose pressed to the catalog page clearly reveal the pattern. They look like pretty standard issue death’s head buttons, except when one looks like it might be more like a dorset pattern, or the one that looks floral. These will be on display in New York if one has the chance, which I will not.

There are pendant portraits like these in museum collections that show a man and his sister. It is possible that what Sotheby’s is offering for sale is a pair like that: a man and his highly eligible sister, not a man and his wife. 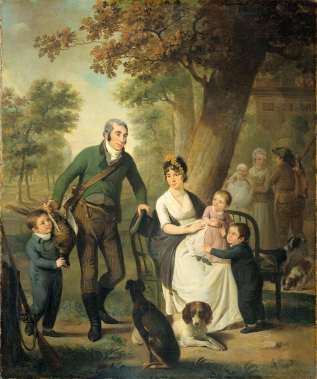 Perhaps because I just finished Longbourn and have just started Year of Wonders, servants are on my mind.

In the family portrait at left, the servants are visible (just) to the right of the tree.

The man and woman almost literally mirror the main subjects, Carel Rutger Reinier van B can Ramerus and his wife, positioned as they are in opposite relationship to each other. The servants, too, are surrounded with life, carrying a child and dogs and game. 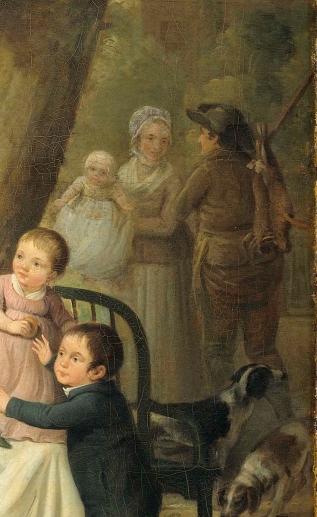 The woman is holding the infant of the van Ramerus couple, and even without Google Translate (that’s “four of their children”) we can figure this out. How? Because the child is held away from her body, and faces forward. It is a slightly odd arrangement, with the infant so peripheral to the main image, but we’re fortunate, because this composition allows us to see the servants.

Class distinctions are clear in the dress: the female servant wears a cap, kerchief and short gown, the male servant-gamekeeper, perhaps–wears breeches and a jacket from the pervious century, as well as a cocked, and not a tall, hat.

It does remind me strongly of the imperative to continue a family line, and the lot of women to breed and produce male heirs. For all that I love the past, I know I could not live there easily.

In three weeks, I start a three week cycle of events in different decades: Saratoga in 1777 will be followed by Boston in 1763, followed by Providence in 1800. This causes a kind of temporal whiplash, though I know well enough what I should wear for 1777 and 1763, and Mr S’s brown coat will cut out this week so I can begin to sew on Saturday.

Providence in 1800 worries me more, but last Saturday’s conversation with Sharon helped immensely, especially when she said, Think Ralph Earl. So simple, I was embarrassed not to have remembered one of my favorite painters.

I need to think below Ralph Earl’s sitter’s station, but as Mrs Brown’s housekeeper or bossiest maid, these portraits represent the type of people I see, people who live in Providence but aren’t the Browns. Ralph Earl’s world of Connecticut merchants and ministers is much like the world I would see. How much more cosmopolitan was Providence than Stonington or New London? They’re all ports, and Providence is busier, but I think that Ralph Earl is a safe bet for understanding the visual context of the southern New England in the 1790s and the styles people wore.

It is especially helpful because he painted women of about the right age. Mrs Canfield at the top of te page was born in 1760, so she’s just a little younger than my character.

Mrs Ellsworth was born in 1756, so she’s a little bit older. Different ages, different styles (yes, styles have also changed between 1792 and 1796). But some constants: long, slim sleeves. White caps and handkerchiefs, layered at the neck. Silk–though that won’t be me–in solid, slightly muted colors.

There’s another Connecticut painter worth looking at: John Brewster, Jr. In this New Republic period, I think it’s really critical to look to American sources for clues to how people projected themselves, how they were seen and wanted to be seen. This is pretty high-falutin’ stuff for a maid, but I’m presuming that I know how to read (because John Brown and his brothers placed an emphasis on education in their own families, and on public education). And if I know how to read, and I work in a house with books and political discussions, chances are good that even in the late 18th century, I have eavesdropped on the discussions and I have read at least the newspapers. I’m living in a certain atmosphere, and how I dress and what I think about will reflect the world around me. 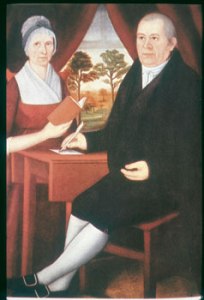 Dr. John Brewster, seen here with his second wife, Ruth, descended from William Brewster. His wife, Ruth, is obviously literate. These people are signaling education and sensibility to us: sober, well to do, respectable. Brewster is not as good a painter as Ralph Earl, so fabric is harder to read. What is her gown made of? Could be fine wool, could be silk: hard to tell. But see that little edge of shift peeking below that three-quarter sleeve? That’s old school for 1795. But I like the neckline and the color. Burnley & Trowbridge have a light-weight wool that color…

Brewster’s portrait of Lucy Knapp Mygatt and her son, painted in 1799, does, I think, help push the date for the Brewster double portrait earlier: by 1799, the painter in more accomplished and bolder in the full-length portrait. He’s also learned to render fabric somewhat more convincingly.

Long sleeves, white cap and kerchief, high waistline: the styles are consistent, but as you move through the subtleties of class, the expression of the style shifts. Front-closing round gown with a waistline that’s high, but lower than what I’ve made in the past, with long sleeves: settled. Now all I need to decide upon is fabric: probably a lightweight, dark-colored wool, though I haven’t found exactly what I want yet. 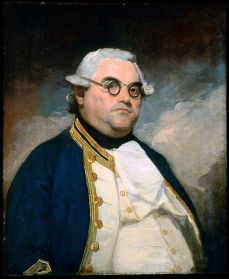 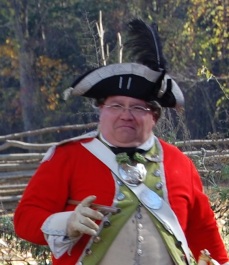 Meet Admiral Peter Rainier, painted sometime between 1778 and 1787. The curious thing about Admiral Rainier is that I know someone who looks uncannily like his portrait.

We found portraits in our collection that look like people we know, and there are people on the street who look like they stepped out of Sandby or Hogarth drawings, even if they’re not in period dress. Take a look: you’ll see it too.